When I started cooking Around My French Table, Gougeres were one of the first recipes I’d made. My kiddo, hereafter referred to as Batman, was a picky eater, but liked cheese, so I gave these “cheesy poofs,” as we came to call them, a shot. He loved them, and they became the thing I made for parties, or when traveling, or anytime I wanted a food available that I KNEW he’d eat.

Funny enough, Gougeres were also the first recipe that the cooking club had made from AMFT.

Because it felt like a nice, full circle, we decided that My Newest Gougeres would be the first recipe we cooked from Everyday Dorie. There are a few tweaks–one less egg yolk, which Dorie says makes the puff sturdier, and the addition of toasted nuts and Dijon mustard.

I don’t know if it was because of that one missing yolk, or if I’m just a better baker/cook than I was in 2012, and executed these differently, but these poofs were crispier, and held their roundness more than the ones I’ve made in the past. They were toasty-cheesy delicious, and I loved them. 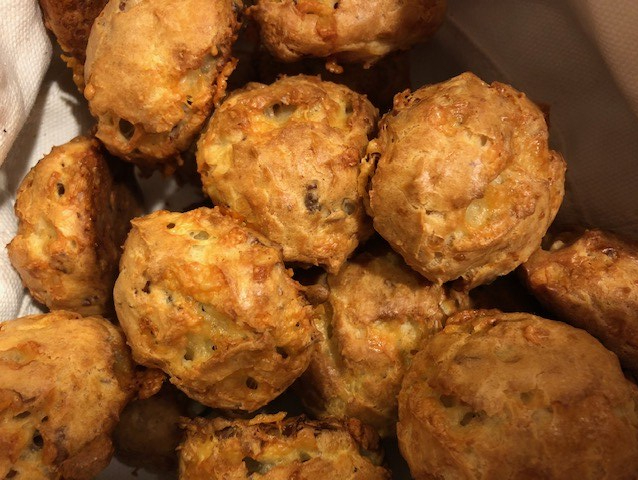 Because these were rounder and crispier, Batman wouldn’t eat them. He’s 8 now. Still hard to feed, though not as bad as he used to be. He said he wished they were softer.

It’s been a while since I made the old recipe for gougeres. I think I need to bring them out to play soon, just to make sure Batman still likes them. I might cry if he doesn’t, because they loom so large in his childhood. I’m really curious to see if that one egg yolk really made that big of a difference, or if the difference is me. Or something mysterious. Temperature? Humidity? The NEED to conduct a series of experiments seems like a pretty good reason to work cheesy poofs back into our normal lives. Ha! At least I know he’ll still eat Dorie’s cauliflower soup…

(Folks who follow me on instagram may see that I’m currently doing a Whole30, and be like, “Wait! Cheese and grain are off limits!” True. The leaders of the club kindly emailed me the recipe ahead of time, and I  made it last week, as a last hurrah.)

I’m so happy to be back with the Doristas, and working on this new book. Check out Cook the Book Fridays to see how everyone else’s gougeres turned out!

I'm a stay at home mom of 2 boys who has decided to DO the things that bring me joy. View all posts by Eila

25 thoughts on “Back to the Beginning”

I didn’t love Children of Virtue and Vengeance as much as I’d hoped to, based upon how completely I enjoyed the first book in the series. I don’t know why, but I had a much harder time visualizing the magic (which is a huge part of the story.) I had to keep re-reading parts to figure out what was happening. The relationships between the characters are strained in this story, so there is necessary emotional distance, but it was those relationships that gave the first book so much heart. Without them, it felt like something was missing. And then the ending was extremely abrupt, and felt like it was crammed in just to provide a set up for book 3. I’m disappointed. ☹️
For Christmas, I got my mom tickets for all of us to see the ZeroSpace “interactive art” exhibit. No one told me I should’ve gotten everyone some drugs, too. 🤣🤣🤣 This place was so trippy. I would NOT want to go at night, when I imagine there is a whole different vibe of people (we mostly saw families and “influencers” posing weird for photos.
I’ve never read James Patterson before, but I’m always down for a good murder mystery, so figured I’d give 1st To Die a shot. It’s awful. I was VERY aware the entire time that this was a man trying to write from a woman’s perspective. The main character is a female homicide investigator who is constantly fighting the urge to cry, needs to turn away from dead bodies, does things “frantically,” lusts after her new hunky partner, and—strangest of all—romantic slow dances to Tori Amos music. Is Tori Amos romantic? It’s been a while, but I’m pretty sure the album I owned back in the day mostly dealt with rape and abuse. Am I remembering this wrong? I feel like James heard Mrs. Patterson listening to it and was like, “My wife is a girl. Tori is a girl. Girls must like this. Thus , my character will like it, too.” Anyway, it’s all very silly, with terrible writing and simple characters. Womp womp. I will not be reading more of the many books in this series.
Curse you, Miracle Creek, by Angie Kim, for playing with my emotions, so! Layers and layers of emotions! This is a courtroom drama regarding the horrific death of an autistic boy (murder or accident?) where everyone is lying, everyone is hurting, and everyone carries some level of guilt. I love this book more for the examination of the complexities of parenthood—joy and rage and love and comparison and competition and trying your hardest and never being good enough and the pain of the loss of touch and loss of connection with your children as they grow up—than for the did she or didn’t she aspect. There’s a lot to unpack here. I loved it.
Nugget’s first circus! He keeps saying he really wishes he could ride horses. I just hope he doesn’t think “riding horses” means standing on their backs and jumping. 😬 #bigapplecircus
I love when Matt cooks. Sweet and Smoky Roasted Carrots, from #everydaydorie by @doriegreenspan , provided by me. Red Cabbage, spaetzle, and a pork chop with a mustard wine sauce, cooked by Matt. I’m stuffed. #cookthebookfridays #doriegreenspan #veggiesmost